What Is An Unlawful Dividend?

Are you a Director concerned about dividends or a creditor looking to recover your money?

What Is An Unlawful Dividend? If you are a creditor of an insolvent company or a bankruptcy, Oliver Elliot can help you address your concerns.

How To Avoid Illegal Dividends

Can You Backdate A Dividend?

Transactions At An Undervalue

Overview Of What Is An Unlawful Dividend

An unlawful or illegal dividend is a dividend declared when the company does not have sufficient profits.

There are six ways for an unlawful dividend to happen:

The requirements before a company can pay a dividend are strict. To protect creditors you should make certain any dividend received is lawful.

You can look to protect yourself from an unlawful dividend but you need to follow the correct procedures. Those procedures are set out in the following infographic: 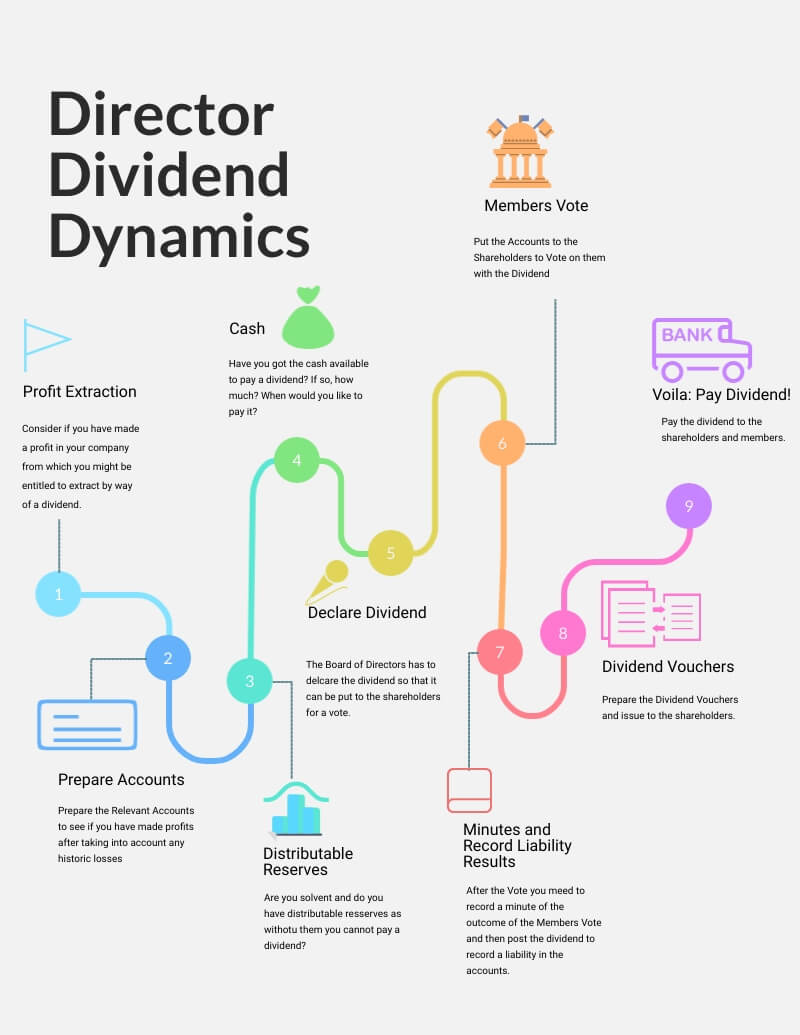 What Is A Lawful Dividend?

The Companies Act 2006 enables subject to certain conditions for shareholders to receive dividends. A dividend can only be paid from profits. This is to protect the company’s creditors. The company’s money should not be extracted by the shareholders at their expense.

If a Director wishes to pay a dividend to shareholders, it has to be DECLARED otherwise it is not created.

In order to declare a dividend, the Board of Directors will need to pass a board resolution. The resolution should refer to the accounts that justify the dividend. These are referred to as the RELEVANT ACCOUNTS accounts. Relevant accounts MUST be referred to in light of Section 836 of the Companies Act 2006.

… the requirement that any distribution should be made only in accordance with a company’s financial statements, drawn up in the proper format and laid before the company in general meeting, cannot be regarded as merely a procedural technicality

To record the dividend a dividend voucher should be issued to each shareholder. This shows what they are in receipt of. This will be part of their shareholder tax records.

Why Are Dividends Declared?

Dividends are declared so the company’s shareholders can receive a return on their investment. Such returns typically take two forms:

Failing To Declare The Dividend

Payment of a dividend without it having been properly declared is not a dividend. Failing to declare the dividend means the transaction may well have to be reversed and repaid to the company. Mr Belcher found this out in the matter of BM Electrical Solutions Ltd & Anor v Belcher [2020] EWHC 2749 (Ch) which has featured in our post Ouch! Director Dividends, Director Loans and Director Liability.

What Are The Conditions For A Dividend?

Dividends Can Only Be Out Of Profits

To consider what an illegal dividend is you need to consider all the features of dividends. Dividends can only be declared out of profits. You can see from the extract of Section 830 of the Companies Act 2006 the restriction imposed.

What Are The Profits Available For A Dividend?

The profits available for a dividend are the accumulated profits.

Profits are not simply cash in the limited company bank account.

Profits are also not the net profit figure shown on the last Profit and Loss Account.

If the profits are insufficient, then the dividend will be unlawful. If it is unlawful it is likely it will have to be repaid. This position is further highlighted by virtue of Section 172(3) of the Companies Act 2006. This refers to the duty to act in certain cases in the interests of the company’s creditors.

Where a company is insolvent, there will typically be insufficient profits for a Director to lawfully declare a dividend.

Remember what a dividend is. It is a distribution of the company’s available profits to its shareholders. A dividend will result in the company’s creditors having less profits available to discharge their debts if the company runs into financial trouble. That ultimately is what gives rise to the strict criteria for dividends.

The rules on dividends mean that creditors should be protected from shareholders taking excessive distributions to their detriment. Hence why rules on dividends require certain procedures to be strictly followed largely without exception. It is not permissible to draw money from a company but after the event say that it was a dividend payment. You must declare the dividend first and then follow all the correct procedures when doing so before making the payments. You do not follow such procedures at your peril.

Will I Have To Repay An Unlawful Dividends?

The consequence of illegal dividends for an insolvent company is that the Director will often have to repay the unlawful dividend back.

Ignorance May Be No Defence To An Unlawful Dividend

An illegal dividend is often considered a breach of duty by a Director. They ought to have been aware that it was unlawful due to the requirement to keep company records. This was highlighted in It’s a Wrap (UK) Ltd v Gula [2006] All ER (D) 161 (May). In that case ignorance was determined to be no barrier for a Director to have to repay an unlawful dividend.

Only Repay The Unlawful Element

However, whilst an illegal dividend is unlawful, nevertheless, often a Director may only have to repay it to the extent that it was unlawful. In other words to repay the element of the insufficient profits. This follows the logic from the case of Re Marini Ltd v Dickenson) [2003] EWHC 334 in which a Director was relieved by the Court from perceived unfairness that might have arisen. It was held in that case to the extent the dividend could have been lawful it did not have to be repaid. Only the s0-called unlawful amount had to be repaid.

Another consequence of an unlawful dividend is you might be liable to pay additional corporation tax to HMRC. This would apply under Section 455 of the Corporation Tax Act 20010 if the illegal dividend creates an overdrawn director’s loan account.

Officers should not in general seek out cases in which it might be argued that dividends that have been paid are unlawful.

the illegal dividend is sometimes easy for HMRC to spot. Therefore it can be a matter included in an HMRC tax investigation. It is simply not worth it. You must get the dividend correct before you declare it to avoid this sort of problem.

A dividend must be declared with reference to relevant accounts. This is a strict requirement in the Companies Act 2006. A dividend cannot be an afterthought. It cannot be something processed after the year-end for accounting purposes to justify a Director’s receipt of company money. You must declare the dividend first and then you can draw it. You cannot backdate it into the accounts after the year-end to justify monies a Director has received during the year.

The danger of backdating dividends should not be underestimated.

For some time, this has been a tax-efficient means for directors to be remunerated. However, before a company is able to pay a dividend, two main criteria must be met:

If these two criteria are met, the company then needs to comply with the formalities before the dividend is paid.

If companies fail to comply with the above requirements, the dividend will be unlawful.

Sometimes unlawful dividends are paid to shareholders when the directors incorrectly determine the company’s profits. This could be due to a mixture of poor record keeping and inaccurate accounts.

Dividends may also be paid incorrectly when the company is insolvent or it may become insolvent as a result of that payment. In the event of the company’s insolvency, it may well have to be repaid when requested by an Insolvency Practitioner.

If you have any questions in relation to What Is An Unlawful Dividend? then Contact Us as soon as possible for advice. Our expertise is at your fingertips.

Disclaimer: What Is An Unlawful Dividend?

This page: What Is An Unlawful Dividend? is not legal advice and should not be relied upon as such. This article Unlawful And Illegal Dividends is provided for information purposes only. You can contact us on the specific facts of your case to obtain relevant advice via a Free Initial Consultation.