Bankrupt Imprisoned For Asset Concealment Of Interest In A Will

By Elliot GreenOctober 20, 2021No Comments

Imagine a dream that begins without even the hint of, being a bankrupt imprisoned for asset concealment. Instead, this dream starts with your being perched at the Godafoss Waterfall, taking in the electrifying view; like the gentleman with the red top on the homepage of the Oliver Elliot website.

Then your mobile phone rings. Over and above the sound of the waves crashing into the rocks at Godafoss, you cannot avoid hearing the message that you have an interest in a Will that entitled you to a considerable sum of money. Dream going ok so far?

Now imagine your dream develops and takes on a more sombre note. You then become aware that you are Bankrupt and the subject of a Freezing Injunction that prevented you from dealing with any of your assets. Oh dear.

Finally, now imagine you awaken and you do not find yourself at the Godafoss Waterfall, instead, you have been sojourned at Her Majesty’s Displeasure. What happened?

The case of Eim v Stacha [2021] EWHC 2761 (Comm) is a case about a bankrupt who now has a 5-month prison sentence. It appears that Perry Lewis, who is Bankrupt, dissipated various assets such as his interest in his mother’s Will amounting to £326,604.80 in breach of a Freezing Injunction.

The backdrop to the Freezing Injunction was as follows:

The underlying proceedings (which were commenced in April 2018) arose out of a complex joint venture arrangement between a number of parties including the Applicants (on the one hand) and Shire Warwick Lewis Capital Limited (an English Company of which Mr. Lewis was a director) intended to implement a Euro/Czech Koruna currency trading strategy devised by the Claimants. The outcome of the joint venture, so far as they were concerned, was that they lost all the margin they put up and received none of the profit to which (it was common ground) their strategy would (or should) have given rise.

The causes of action pleaded included damages for conspiracy and fraudulent misrepresentation. The course of the proceedings was described in Tuson 2 at [8]-[22], and in [5] – [17] of the judgment of Andrew Henshaw QC delivered on 1 February 2019. This was the judgment on the basis of which the Revised Freezing Injunction was granted.

Shortly thereafter, on 11 March 2019, default judgment was entered against all the Defendants (including Mr. Lewis) in the total sum of €4,448,416.24 (plus interest and costs in amounts to be decided by the Court). The principal judgment remains unsatisfied (such sums as have been recovered via Mr Lewis’s bankruptcy have been applied to outstanding costs orders).

On 19 July 2019, a bankruptcy petition was presented against Mr Lewis by those looking to recover their debt.

The Trustee In Bankruptcy did not know about the interest that Mr Lewis had in the Will until 23 June 2020. This information does not appear to have been volunteered by Mr Lewis as he is obligated to do pursuant to Section 333 of the Insolvency Act 1986.

The Deed of Variation defined Mr. Lewis as the “Beneficiary”; Recital 1 b) referred to paragraph 7.1 of Mrs. Lewis’s will; Recital 1 c) recited that Mr. Lewis (the “Beneficiary”) “has decided that of the remainder of the estate due to himself … the sum of £125,000 be left to his wife”. By Article 2, Mr. Lewis purported to “authorise and request the Executors to appropriate £120,000 of the Estate to [his wife]” (emphasis language).

Mr Lewis’ interest in his mother’s Will was an asset of the bankruptcy estate.

The Trustee In Bankruptcy put Mrs Lewis on notice of a claim pursuant to Section 339 of the Insolvency Act 1986 as a Transaction At Undervalue but this was resisted:

her solicitors had resisted making repayment, making no admission that the Deed of Variation was invalid, and stating that £116,000 of the sum in question had been used to pay off her mortgage and asserting that Mrs. Lewis had insufficient liquid funds to make any substantive payment

Mr Lewis in a witness statement dated 22 September 2021 sought to say that whilst he was aware of the Freezing Injunction he thought it did not extend to his Executorship of his mother’s estate. He said he had sought to give effect to his mother’s wishes as follows:

(4) “…I knew that it had been important for her to ensure the inheritance went to support Lorraine. I formed the view that I would rather give up my share of the inheritance than lose it in my bankruptcy. I wrongly thought that it did not form part of my assets until it was distributed to me. I decided to waive my inheritance“. (para 2.10)

(5) “I had already decided to waive my inheritance before I executed my affidavit on 23 September 2019. I had informed my brother David (My brother Richard lives in Israel). I therefore did not regard this as a realisable asset as referred to in the affidavit. I formalised this when I executed the Deed of Renunciation on 21 October 2019. Again, I now accept this was wholly wrong”. (para 2.11)

(6) “At the time I believed that my action of waiving my entitlement was lawful. Here, although I have little experience with the law relating to freezing orders and insolvency, I had experience in my professional career, of clients who had waived or reassigned their entitlement under a will. These assignments were treated as if the Testator had amended their will. What I did not appreciate is that the deeds so executed, were effective only for tax purposes and not for insolvency and other purposes. I therefore thought that the execution of the deeds was lawful and that therefore the assets in my mother’s estate did not form part of my assets.” (para 2.13)

(7) “Given my impending bankruptcy, in November 2019 and as Executor I paid all the residue of my mother’s estate to my brother David. I asked him to take over the administration and distribution of the remaining estate.” (para 2.14)

(8) “It was only after solicitors acting for my Trustee in Bankruptcy wrote to my brothers on 11 July 2020 that I took legal advice and discovered that I had breached the freezing injunction. I now realised that the Deeds drafted to re-allocate my mother’s estate were void under the Insolvency Acts”. (para 2.14)

(9) “I truly believed that I was not breaching the terms of the freezing injunction at the time I executed the two Deeds. Indeed had I been of the mind just to breach the Order, it would have been a pointless exercise in executing these Deeds as they would have had no legal effect. I did not regard the effect of the Deeds as making gifts as at the time as I thought these were not yet my assets to give. I understand now that I was wholly wrong. I apologise to the Claimants and to the Court for my wrongdoing and the difficulties that it has caused to them”. (paras 2.18-2.19)

Judicial Comments: Bankrupt Imprisoned For Asset Concealment Of Interest In A Will

The judge in this case was not seemingly impressed with Mr Lewis’ evidence:

There are, of course, many reasons why a witness may lie, or embellish his evidence, but in the present case I am quite sure that such lies were on the operative path of Mr Lewis’ attempted defence that he knowingly and deliberately breached the terms of the Freezing Order…

In short I consider that Mr Lewis was not a witness of truth when it came to matters forming the operative part of his defence, most particularly in relation to his understanding of the Freezing Order and its terms, and as to his own knowledge and belief about what it meant and his alleged belief that he was not breaching the Freezing Order when undertaking the matters the subject mater of Allegation 1, nor when stating the matters the subject matter of Allegation 2. Such a finding is entirely consistent (as addressed below) with (1) the ordinary and natural meaning of paragraphs 4 and 5 of the Freezing Order (their actual meaning now being common ground), and (2) the fact that Mr Lewis’ evidence as to why he did not believe he was acting in breach of the Freezing Order when acting as he did simply defies belief, not least in circumstances where I formed the clear impression that Mr Lewis is not only a qualified chartered accountant but also an intelligent man well able to understand the terms of the Freezing Injunction (contrary to his protestations to the contrary) and his evidence as to why he did not think it applied to what he proposed to do, and did (which itself was not capable of belief as addressed below). Mr Lewis’ evidence is also belied by certain candid and telling evidence given by Mr Lewis in unguarded moments during his cross-examination. 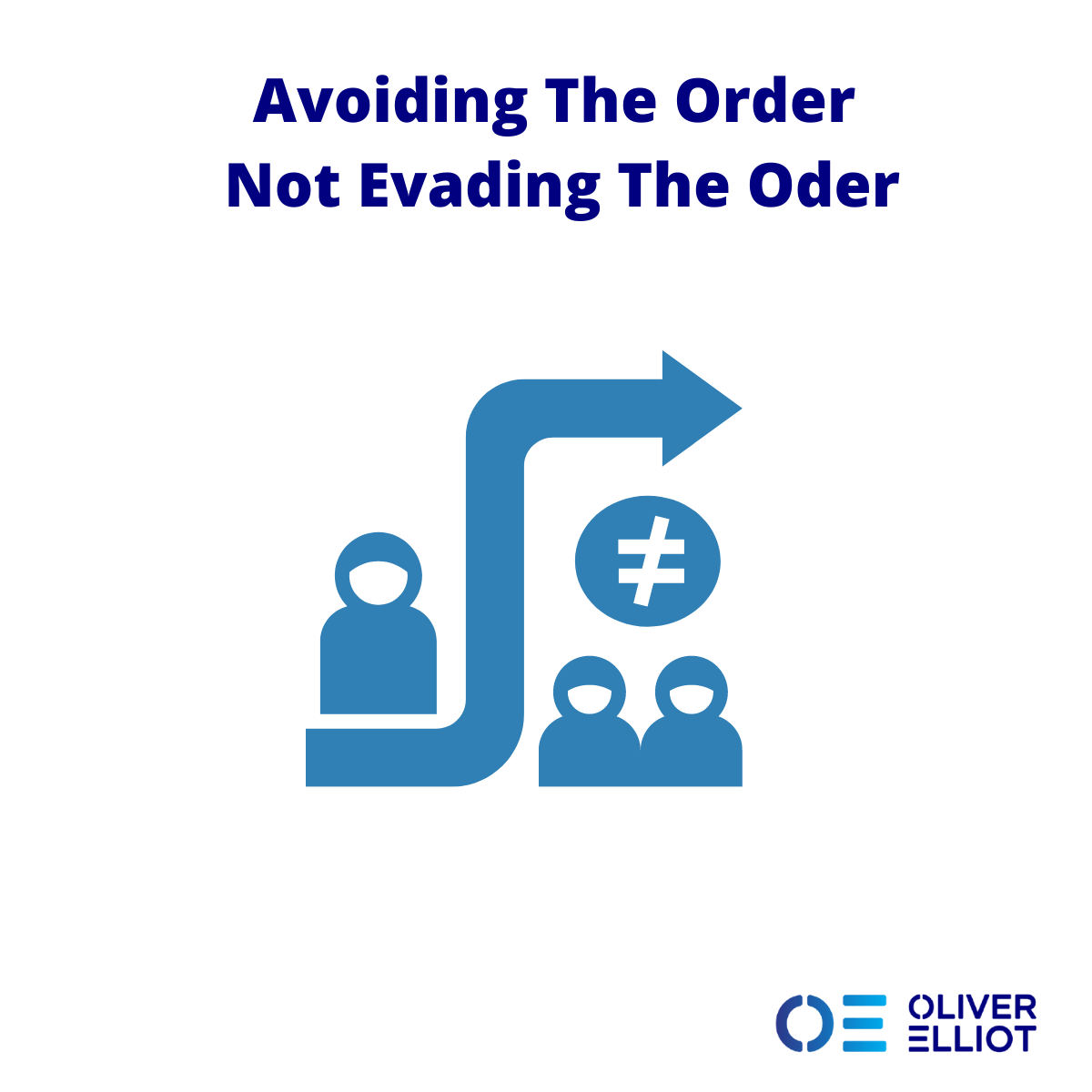 One of Mr Lewis’ defences was that the Deed to vary the Will was avoidance not evasion ie. of the freezing order. This suggestion, that the avoidance and evasion concept typically understood to be applicable to tax matters, could have application here did not convince the judge. Here is the pertinent cross-examination and judge’s comment:

“A: … I genuinely thought that it — that the deeds were a mechanism for avoiding the order as against evading the order.
Q. When you use the “avoid” and “evade”, are you trying to
use them this accountancy terms?
A. Yes, yes, “evade” being illegal and “avoid” being a way
round — a legal way round.”
….
MR FLETCHER: So your mindset was that you were looking to
find a way around the freezing injunction?
A. Yes.(emphasis added)”

If you have any questions in relation to Bankrupt Imprisoned For Asset Concealment Of An Interest In A Will then contact us as soon as possible for advice. Oliver Elliot offer a fresh approach to insolvency and the liquidation of a company by offering specialist advice and services across a wide range of insolvency procedures.

Disclaimer: Bankrupt Imprisoned For Asset Concealment Of An Interest In A Will