How To Spot A Backdated Dividend

A Backdated Dividend Can be Spotted In A Number Of Ways

How to spot a backdated dividend is not rocket science; it does require some consideration of what really happens when a Director has to prepare the annual statutory accounts for Companies House and HMRC.

It has been explained in the following article Can You Backdate A Limited Company Dividend? that to backdate a dividend is impermissible conduct for a company Director.

It is important to emphasise that whilst this article breaks down some of the ways that a backdated dividend MIGHT be spotted, no individual feature would likely or necessarily enable a leap to an overall conclusion. You have to consider the totality of the evidence at your fingertips to make properly informed, balanced and competent observations on the matter.

Deploy The Enquiring Mind – How Might A Dividend Be Backdated?

In order to consider how a dividend might be backdated you need to put on your investigation hat and deploy your enquiring mind.

The starting point is to consider how the annual accounts are compiled.

Preparation Of The Annual Accounts After The Year-End

Complete preparation of the annual accounts is almost impossible prior to the year-end for the vast majority of trading businesses. Therefore it is axiomatic that there will be some element of the preparation of the annual accounts after the year-end. This is a crucial element in the potential for spotting a backdated dividend.

The reason that it is largely impossible to prepare a set of annual statutory accounts prior to or at the year-end date is that even on the last day of the financial year there will be transactions being processed that need to be recorded.

Whilst it might in theory be possible to prepare a set of accounts at the year-end date itself, in practical terms for most trading businesses this is just not a feasible thing to do, even for a small company.

Before the days of online banking for example, you could not even do your bank reconciliation until the bank posted a set of monthly bank statements. Even with the technological advancements in respect of online banking, whilst the bank reconciliation is the fundamental starting point of most accounts preparation procedures, it is usually one of a number of tasks that might be time-consuming that need to be undertaken before a set of accounts can be finalised.

Until a set of accounts are assembled properly you simply might not be able to accurately foresee what they will say. Until you know what the year-end profit is you do not know what your accumulated profits might amount to. Therefore you do not know the level of distributable reserves available for a dividend.

In order to pay a dividend, you have to declare it. If you are going to base your dividend on the year-end accounts as is very common for SMEs (that may only prepare accounts once a year at their year-end), you cannot declare the dividend until after the year-end.

Subject to certain circumstances outlined in this article, a year-end adjusting journal that appears in the accounts working papers is a POSSIBLE sign that a dividend COULD have been backdated into the accounts. But that is all that it is.

It is nothing more than a possibility and it should not either be considered a probability. It is NOT in any way the basis to assert evidence of backdating a dividend. Therefore, exercise care before making any allegation based upon a year-end journal as that would be an extraordinary leap. It is probable that a dividend has been properly declared but not found its way into a set of draft accounts, hence another reason for the need for adjusting journals. However, nevertheless, a dividend adjustment journal COULD trigger a brainwave or suspicions that a backdating issue MIGHT not necessarily be some remote possibility.

A schedule in the accounts working papers of adjusting journals MIGHT be dated and as a result, COULD indicate when a dividend was FIRST considered. It thereby COULD be a sign of backdating. If a company only prepares accounts after each year-end, then the journal adjustments will almost inevitably be dated after the year-end.

However, if there is no evidence (or no other evidence) at all of a dividend being created PRIOR to the year-end journal entry, then that might be a possible indication of backdating.

With that in mind let’s have a look at some fictional accounts that do resemble some sets of annual accounts filed by companies at Companies House. This fictional company is called Back To Best Limited.

Example: Back To Best Limited – How To Spot A Backdated Dividend From The Balance Sheet

Back To Best Limited has prepared a set of fictional annual accounts for the year ended 30 June 2021 and these were signed by its fictional Director, Mr Backwater on 1 September 2021. 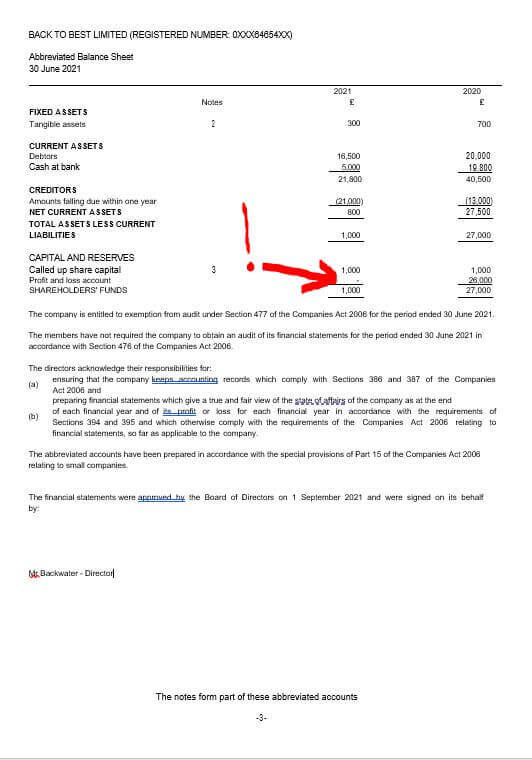 Back To Best Limited is a normal trading company in this hypothetical example.

What is conspicuous about Back To Best Limited’s balance sheet as at 30 June 2021 is the Profit and Loss Account figure is exactly £ZERO.

You do not know from the balance sheet alone that Back To Best Limited declared a dividend (backdated or otherwise) during the year to 30 June 2021 but it MIGHT. Assuming that Back To Best Limited had declared some dividends then it might be something of a coincidence for a normal trading company to have declared a dividend such that its Profit and Loss Account Reserve featured at exactly £ZERO at the year-end. It is certainly not at all impossible or even improbable but POTENTIALLY it could be enough to trigger that enquiring mind.

So if you know that a company prepares accounts only after each year-end and that it typically declares dividends AND it has a balance sheet profit and loss reserve of £ZERO, it is POSSIBLE that dividends are being brought into the accounts after the year-end as if they had been declared during the year ie. therefore backdated.

This could potentially be the most likely way to spot and discover a backdated dividend.

Perhaps unsurprisingly many Directors seek the assistance of third-party service providers to prepare their annual accounts. Many of these Directors may with alacrity acknowledge that preparing accounts is not their field of expertise. This is where such Directors may run into difficulty when they have backdated a dividend.

Imagine if they are challenged in legal proceedings brought by a Liquidator or HMRC about dividends in sets of annual accounts and questioned by a barrister under cross-examination about assertions made in their witness statement(s) about the intricacies of the dividends. Here are some of the questions that they might have to deal with:

A finance Director ought to be able to address such questions with confidence but what about the Director of a small SME?

If a Director cannot answer these questions because they really do not understand accounts and how they are compiled the backdating position could sprout quite readily from the cross-examination.

Are you a Director or creditor of company?

If you are a Director or creditor of an insolvent company, Oliver Elliot can help you address your claim and concerns arising from the insolvency.

If you have any questions in relation to How To Spot A Backdated Dividend then contact us as soon as possible for advice. Oliver Elliot offer a fresh approach to insolvency and the liquidation of a company by offering specialist advice and services across a wide range of insolvency procedures.

Disclaimer: How To Spot A Backdated Dividend