How To Set Aside A Statutory Demand

Overview Of The Statutory Demand

How To Set Aside A Statutory Demand is an article that is organised to explain AND show you by providing EVIDENCE from a recent real case, the basis upon which you can set aside a Statutory Demand or not as the case might be.

Note that a Statutory Demand cannot be set aside based on the mere SUGGESTION of the debt being disputed.

KEY FACT TO SET ASIDE A STATUTORY DEMAND

To set aside a Statutory Demand you need to either be:

What Is A Statutory Demand?

It is a formal demand for payment that is recognised in the legislation, hence why it is called a STATUTORY demand and looks like this: 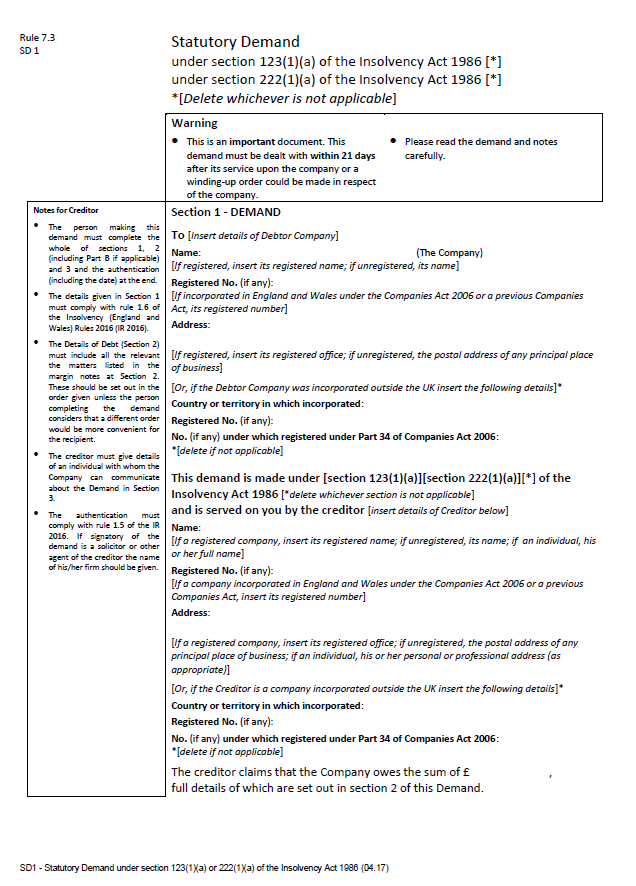 Effect Of A Statutory Demand

If you are served with a Statutory Demand you must deal with it. It is a procedure that can lead to an individual being made Bankrupt or a company going into Compulsory Liquidation. Both of which can have severe financial consequences and as a result should be taken very seriously indeed.

It is therefore extremely important that if you are served with a Statutory Demand that you deal with it at the earliest possible point in time and if in any doubt seek out independent professional advice.

Timescale For Dealings With A Statutory Demand

In a nutshell, you have 18 days to deal with a Statutory Demand because after 21 days the creditor can petition for an individual’s bankruptcy or wind up a Limited company in respect of an unsatisfied Statutory Demand.

In order to issue a Statutory Demand to a person that owes you money, it needs to be served on them. In order to serve the Demand on someone, all things necessary to bring it to their attention are required for service to be effected properly.

To ensure that “service” has been effective it is commonplace to make use of the services of a Process Server for example who will physically present the Statutory Demand to the individual or company concerned. In the case of a limited company, service can be effected by presenting the Demand to an officer of the company such as a Director, Company Secretary or by leaving it at its registered office.

It should be noted that in most cases service by post is usually not deemed to be sufficient unless the Court has made an Order for what is known as Substitute Service after alternative attempts have been shown to have been tried and failed.

Options Upon Receipt Of A Statutory Demand

When you receive a Statutory Demand you have a number of options available to you:

Perhaps the most simple way to dispose of the Statutory Demand is you simply discharge the debt due to the creditor.

The legislation sets out the terms upon which a debt can be disputed as follows:

Rule 10.5 (5) of the Insolvency (England and Wales) Rules 2016 provides that the court may grant an application to set aside a statutory demand if:

(a) the debtor appears to have a counterclaim, set-off or cross demand which equals or exceeds the amount of the debt specified in the statutory demand;

(b) the debt is disputed on grounds which appear to the court to be substantial; and …

(d) the court is satisfied, on other grounds, that the demand ought to be set aside.

If you do not consider that the debt is due to the creditor or that the amount claimed by the creditor is wrong then you can dispute the Statutory Demand and notify the creditor of your position. You should not delay doing this as there is a general obligation to look to narrow down the points of disagreement that divide you and the creditor in respect of the debt in question.

However, if you are going to dispute a creditor’s debt there is no real merit in doing so if you do not have a good chance of convincing the Court that you do indeed have a dispute and that your position has a good chance of succeeding.

Negotiate With The Creditor

You may be able to enter into a payment plan with the creditor which will restructure the payment terms of your debt and enable the Statutory Demand to be in effect dropped and superseded.

If you are insolvent there is still time to look into other insolvency procedures such as:

The main basis upon which a Statutory Demand is set aside is if it is disputed. It can be disputed on a number of grounds: 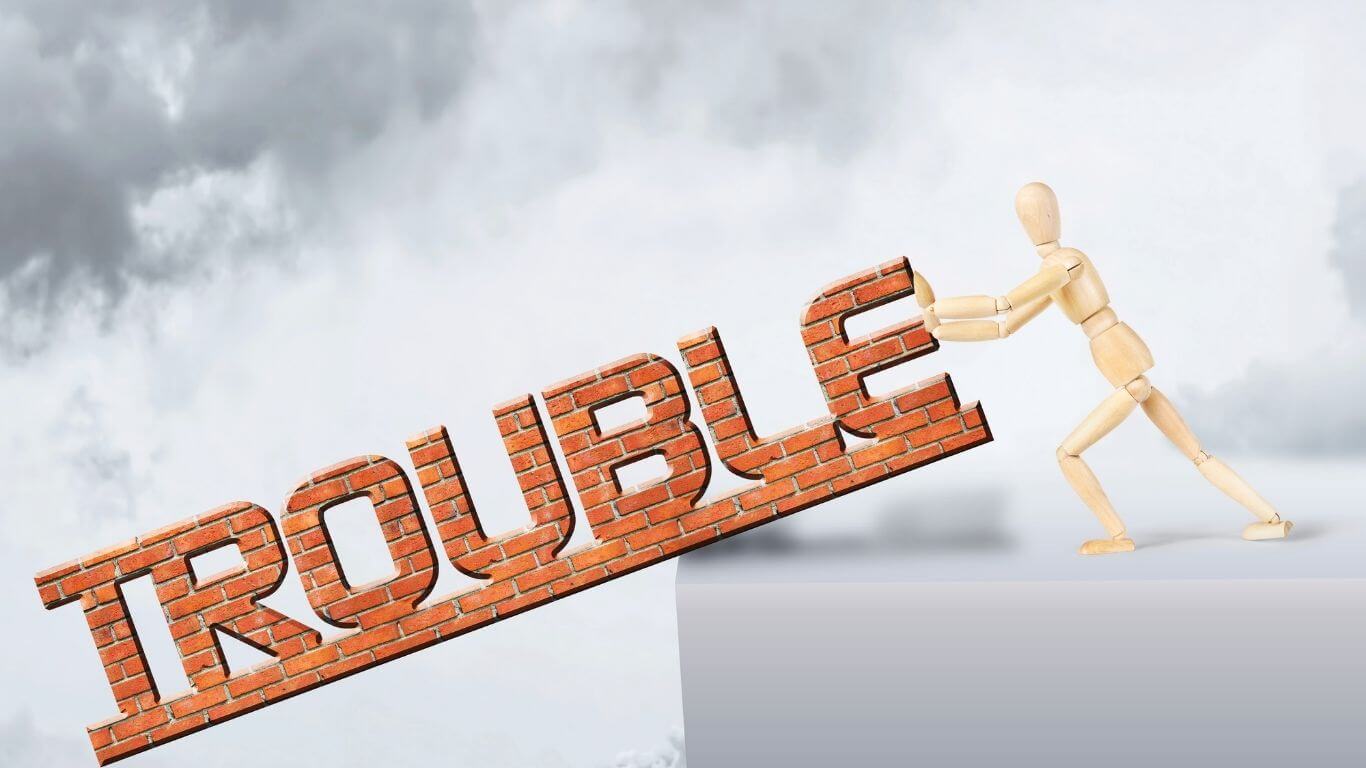 In the case of companies (as opposed to individuals), there is no specific procedure for setting aside a Statutory Demand. However, a creditor that does not have a judgment against a company would be unwise to seek to issue a Winding Up Petition against a company in circumstances where the debt is genuinely disputed.

Evidence From An Attempt To Set Aside A Statutory Demand

The case of Kerkar v Investment Opportunities IV PTE Ltd [2021] EWHC 3255 (Ch) arose where an individual, Mr Kerkar tried to set aside a Statutory Demand in respect of a huge debt of over £52 million.

Mr Kerkar had signed a personal guarantee that he provided in relation to one of his relevant companies, Prometheon Holdings (UK) Limited (“PHUK”). PHUK did not dispute that it owed the creditor, Investment Opportunities IV PTE Limited (“IPIV”) the sums claimed in the Statutory Demand.

I find it inherently implausible that a man of Mr Kerkar’s extensive business interests would have been prepared to rely on a statement, the meaning of which was not clearly articulated, made four months earlier, in relation to a different lending arrangement, that contrary to the clear and express wording of the agreement he was about to sign, it would not seek to rely upon his personal guarantee. There is nothing to negate the express agreement contained in the guarantee.

This notably strong position adopted by the Court rejected cleanly the position of the party attempting to dispute the debt of IPIV, ie. Mr Kerkar.

There was a further position adopted by Mr Kerkar in respect of an alleged fraud claim apparently perpetrated against his group of which the company PHUK was a party.

This suggestion did not help Mr Kerkar because he could not satisfy the Court of any of the fraud suggestions that he put forward. They were based on certain matters of belief as the Court said the following:

In my judgment, Mr Kerkar’s cross claim in relation to the fraud committed against C&K falls squarely within the types of cases contemplated in Lady Anne Tennant. It is all surmise, based on his unsubstantiated belief that Mr Maheshwari, as the controller behind all SSG entities, is somehow responsible for PHUK’s inability to repay monies it borrowed from the Respondent which he guaranteed. With the optimism of Mr Micawber he appears to have hoped to have persuaded the court that within the tangled web of allegations of fraud that he has raised, the court will find a cross-claim which bears a real prospect of success and justifies setting aside the statutory demand and sending the Respondent back to square one to start Part 7 proceedings.

Allegations of fraud do not, of themselves, compel the court to conclude that further investigation is warranted. For the reasons I have given, the evidence which Mr Kerkar has placed before the court, even against the background that he seeks to paint by reference to claims in the USA regarding PISL and his allegations of fraud and forgery concerning transactions SSG Capital and two BVI companies, do not support his allegations of fraud to the extent of meeting the threshold test of persuading the court that any one of them has a real prospect of success.
…

In conclusion, I find that the evidence provided raises no more than a cloud of objections. For the purposes of Rules 10.5(5)(a) and 10.5(5)(b) there is no or insufficient evidence to support the allegations made to satisfy the court that there is a real prospect of success. For the purposes of Rule 10.5(5)(d) there are no other grounds on which the demand ought to be set aside.

When handing down this judgment, I shall dismiss the application and make an order authorising the Respondent to present a bankruptcy petition against Mr Kerkar.

This case should serve to highlight how you might need to get your ducks in a row to have the necessary evidence and records available to you to dispute a Statutory Demand if you feel that you have good cause to do so. Both this case and the post Appeal Against Statutory Demand Rejected – “if there was a fraud it was a good fraud” suggest that the Court will look with care at fraud allegations.

Are you an individual with a Statutory Demand?

If you are an individual or company Director, Oliver Elliot can help you address your concerns arising from the Statutory Demand and insolvency.

If you have any questions in relation to How To Set Aside A Statutory Demand then contact us as soon as possible for advice. Oliver Elliot offers a fresh approach to insolvency and the liquidation of a company by offering specialist advice and services across a wide range of insolvency procedures.

Disclaimer: How To Set Aside A Statutory Demand