‘Gossip’, Risk Of Judicial Bias And Pedestrian Pace In Litigation

By Elliot GreenOctober 9, 2021No Comments

Perception Of Impartiality Is No Trivial Requirement

Overview Of ‘Gossip’, Risk Of Judicial Bias And Pedestrian Pace In Litigation

Bias and pedestrian pace in litigation feature as observations from the case of Charisteas v Charisteas [2021] HCA 29.

The matter involved matrimonial proceedings now spanning over a period equating to over half the length of the marriage, such is the pace at which this litigation has proceeded it would seem. The husband and wife were married for 26 years. The husband it appears may have decided its time was up in 2006 when he commenced legal proceedings to address the property settlement.

To put this timescale in context, according to the World Bank in 2019 the average Australian life was expected at birth to last 82.9 years. Australia has one of the finest life expectancies in the world, beaten only in 2019 by 12 other countries.

Here in the UK we seem to be languishing eighteen places behind Australia with an average life expectancy at birth in 2019 of 81 years.

The Litigation Period To Date

It appears that if you dip your toe into the litigation arena and you want the litigation period to stretch to the minimum as a proportion of your life, then you might best be born in Hong Kong, where life expectancy at birth in 2019 topped the table at 85 years. 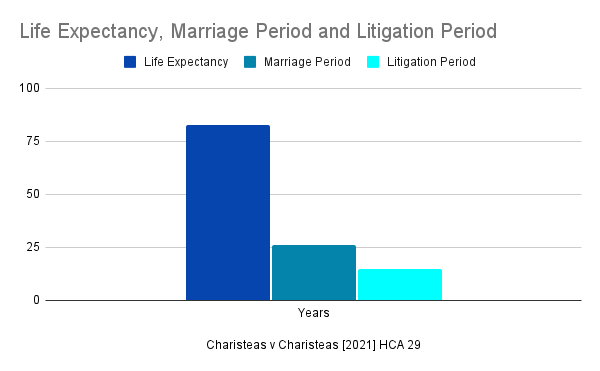 In this case, the Court referred to the length of time that the litigation had been afoot and as ever so typical the cost:

The ensuing and still unfinished litigation was aptly described by the trial judge as “long‑running” and “staggeringly expensive”. There has been a litany of applications, hearings, orders and appeals. For present purposes, it is necessary to refer to only some of this unfortunately long and tortured history.

The husband’s mother and representatives of the husband’s father’s estate had initiated a judicial recusal appeal which had been rejected. However, whilst one might have thought that was the end of the matter, it seems not in this case.

It appears that a bit of ‘gossip’ sprouted and the husband’s lawyer sought clarification that there had been no contact between the wife’s barrister and the original trial judge:

The response of the wife’s barrister was interesting:

Two weeks later, the barrister responded stating that she had met with the judge for a drink or coffee on approximately four occasions between 22 March 2016 and 12 February 2018; had spoken with the judge by telephone on five occasions between January 2017 and August 2017; had exchanged “numerous” text messages with the judge between 20 June 2016 and 15 September 2017 (except for a brief hiatus during the evidence stage of the trial); and had exchanged “occasional” text messages with the judge from 15 September 2017 until 12 February 2018. The barrister concluded by stating that the “communications” with the trial judge did not concern “the substance of the … case”. The husband filed an amended notice of appeal adding grounds alleging apprehension of bias.

The Court found that the original recusal appeal result on the grounds of apprehension of bias was erroneous because whilst contact between the wife’s barrister and the judge had ceased during the evidence, it had resumed prior to the judgment.

The rule protecting litigants is so strict, contact must not take place without informed consent. That highlights the importance of perception.

What seems to have particularly alarmed the latest appellate court was that it appears some of this contact had resumed whilst the trial judge was having to grapple with an application to recuse himself on other grounds:

15 A fair‑minded lay observer, understanding that ordinary and most basic of judicial practice, would reasonably apprehend that the trial judge might not bring an impartial mind to the resolution of the questions his Honour was required to decide. The trial judge’s impartiality might have been compromised by something said in the course of the communications with the wife’s barrister, or by some aspect of the personal relationship exemplified by the communications. Accordingly, there is a logical and direct connection between the communications and the feared departure from the trial judge deciding the case on its merits.

16 In their reasons the majority in the Full Court recognised the principle of judicial practice. Their Honours accepted that once a trial has commenced, private communication between a judge and counsel for one of the parties, without the knowledge and consent of the other parties, is so obvious a departure from the norms of judicial and professional conduct that it will usually be sufficient to establish the first limb in Ebner v Official Trustee in Bankruptcy. Nothing that was said in the passage in Magistrates’ Court at Lilydale extracted above, in guidelines or in a leading text on judicial ethics limits the period necessary to avoid communication to after the commencement of the trial. In any event, whilst communication here was halted while evidence was taken, it was resumed before final submissions and continued over the lengthy period of 17 months when the written reasons for the judgment on the question of recusal and the judgment on the settlement of property were reserved.

17 Focusing on this latter period, the majority in the Full Court reasoned that the trial judge and the wife’s barrister were aware of some of their obligations, by not communicating during the course of the trial, and the trial judge may be taken to have failed to appreciate that the same strictness applied at other times. According to the majority, the hypothetical observer would understand that the trial judge mistakenly held such a view but would not consider his lack of disclosure to be sinister.

18 This reasoning is erroneous. The apprehension of bias principle is so important to perceptions of independence and impartiality “that even the appearance of departure from it is prohibited lest the integrity of the judicial system be undermined” (emphasis added). No prediction by the court is involved in deciding whether a judge might not bring an impartial mind to bear. No question as to the understanding or motivation of the particular judge arises.

19 The lack of disclosure in this case is particularly troubling. It is difficult to comprehend how the trial judge could have failed to appreciate the need to disclose the communications, particularly when he was dealing with the application to recuse himself on other grounds. It may give the hypothetical observer reason to doubt the correctness of the claim by the wife’s barrister that their communications did not concern “the substance” of the case, if the ambiguity inherent in that statement is not itself of sufficient concern.

20 The majority also reasoned that the second limb in Ebner was not made out by reference to what the fair-minded lay observer, properly informed as to the judiciary and the Bar, would think. The information included that barristers are professional members of an independent Bar who do not identify with the client; that judges are usually appointed from the senior ranks of the Bar; and that it may be expected they will have personal or professional associations with many counsel appearing before them. Informed by such matters, the majority reasoned, the hypothetical observer would be “able to tolerate” some degree of private communication between a judge and the legal representative of only one party, even if undisclosed. The majority considered that the hypothetical observer would accept in this case that the judge and the wife’s barrister would adhere to professional restraint in what was discussed and would accept that a professional judge who has taken an oath of office would not discuss the case at hand.

21 Once again, this reasoning is erroneous. The alignment of the fair-minded lay observer with the judiciary and the legal profession is inconsistent with the apprehension of bias principle and its operation and purpose. The hypothetical observer is a standard by which the courts address what may appear to the public served by the courts to be a departure from standards of impartiality and independence which are essential to the maintenance of public confidence in the judicial system. The hypothetical observer is not conceived of as a lawyer but a member of the public served by the courts. It would defy logic and render nugatory the principle to imbue the hypothetical observer with professional self‑appreciation of this kind.

22 It may be accepted that many judges and lawyers, barristers in particular, may have continuing professional and personal connections. The means by which their contact may be resumed is by a judge making orders and publishing reasons, thereby bringing the litigation to an end. It is obviously in everyone’s interests, the litigants in particular, that this is done in a timely way.

If you have any questions in relation to ‘Gossip’, Risk Of Judicial Bias And Pedestrian Pace In Litigation then contact us as soon as possible for advice. Oliver Elliot offers a fresh approach to insolvency and the liquidation of a company by offering specialist advice and services across a wide range of insolvency procedures.