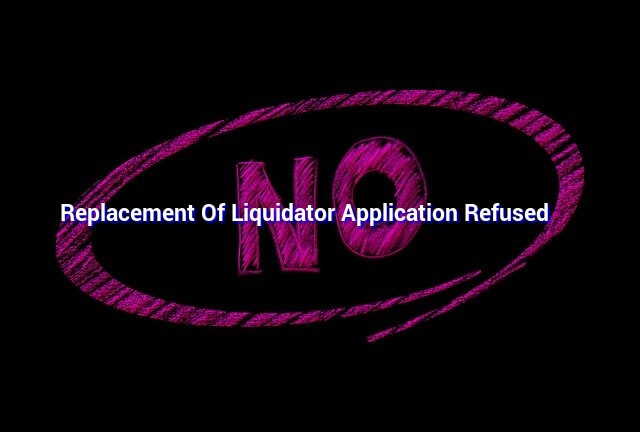 Replacement Of Liquidator Application Refused is a post flowing from the case of ROBERT ALLAN JACOBS as liquidator of NECESSARY HOLDINGS PTY LTD (In Liq) -v- LENTON BRAE LTD PARTNERSHIP (A FIRM) [2021] WASC 10.

This was a case heard in the Supreme Court in Western Australia.

The Second Defendant, Offa Pty Limited (“Offa”) sought the Liquidator’s removal and replacement through the application.

The only ground relied upon by the Second Defendant, Offa for the removal of the Liquidator was the failure by him to seek leave for Necessary Holdings Pty Limited to continue as General Partner until September 2020 or obtain leave until 17 December 2020.

The Court examined the legal principles applicable to the removal of a Liquidator.

Cause To Be Shown: Replacement Of Liquidator Application

The Court said that a replacement of Liquidator application had to show ’cause’ through the provision of particularised allegations that would enable consideration of the Liquidator’s conduct.

The burden is on the party seeking to remove and replace the Liquidator. The Court said it ought not to be easy to replace a Liquidator simply because his or her conduct had fallen short of the ideal.

Better Conduct Of The Liquidation

For the replacement of Liquidator application to succeed, the Court suggested that the action would need to benefit those parties who had an interest in the Liquidation and or be in the best interests of the Liquidation..

The Court would take account of the professional consequences arising from a Liquidator being removed and would afford him or her ‘fair play’.

Timing Of The Application For Replacement Of A Liquidator

The Court would consider the timing and to avoid wasting costs might be more reluctant to intervene if the Liquidation was close to completion or well established.

It was said that a mere loss of confidence would not be sufficient to remove a Liquidator from office.

Liquidators take practical commercial decisions and even if not every decision was fully reasoned or supported by the fullest investigation, the Court should not necessarily look to second-guess them.

Consideration Of How Expense Has Been Incurred

The Court said it expected a Liquidator to be prudent whilst incurring expense in view of the inevitable prospect that a Liquidation meaning creditor claims would be unlikely to be paid in full.

The Court said it would need to consider the wishes of the parties that had a real interest in the Liquidation.

The Court had this to say when applying those principles to the facts of this case:

It is not in dispute that the plaintiff, as liquidator of Necessary Holdings, owes fiduciary duties to the company.

However, for the following reasons, I do not consider that on the evidence before me, Offa has discharged the burden for removal of the plaintiff as liquidator of Necessary Holdings.

First, while I accept that the failure to obtain leave from the Commissioner has exposed Necessary Holdings to a penalty, at this stage, no action has been taken by the Department in relation to the offence and there is no evidence before me as to whether this is likely to occur. While this failure gives rise to a possibility of a conflict of interest, at this stage, I consider that it is only a possible conflict; the conflict has not arisen. A conflict of interest may arise if the Department prosecutes Necessary Holdings and the liquidator seeks to recover the costs of the prosecution and any penalty imposed from the assets of Necessary Holdings. Given that the plaintiff’s remuneration requires court approval, any objections by Offa or the Interested Parties as to these costs (if they arise) can be addressed at that stage.

Second, this was the only matter that was relied upon at the hearing before me. As noted above, before orders are made for the removal and replacement of a liquidator, it will generally be necessary for an applicant to demonstrate there has been a course of conduct by the existing liquidator which evidences a lack of impartiality or that it is in the best interests of the liquidation that the liquidator be removed. There is no evidence before me of any lack of impartiality by the existing liquidator nor a course of conduct that would justify his removal.

Fourth, Mr Jacobs was appointed as voluntary administrator in May 2020 and liquidator in September 2020. Mr Jacobs is familiar with the Business and is well advanced in the winding up of Necessary Holdings. I accept that if he is replaced, there will be wasted expenditure and that it will inevitably cause delay in the winding up. Any replacement of the plaintiff at this stage is likely to have particular impact on the Business as decisions are required to be made in relation to imminent harvest.

The Second Defendant, Offa’s replacement of liquidator application was dismissed.

If you have any concerns in relation to a replacement of a liquidator then Contact Us as soon as possible for advice. Our expertise is at your fingertips. Our CEO, Elliot Green is prepared to give you his time to discuss your case with you and help you – initially via a Free Consultation.

Close Menu
Call us for a free initial consultation