What duties does a director owe and to whom?

Are you a Director concerned about your duties in relation to your Limited Company?

Are you a Company Director concerned about your directors duties and looking for a solution to close and liquidate your company? Oliver Elliot can help you with both an insolvent or a solvent liquidation.

Transactions At An Undervalue

Directors’ duties involves fiduciary duties owed to the company of which they are the Director.

Such duties encompass a fundamental duty of loyalty and to act in the best interests of the company, in good faith. There is an overriding duty not to secretly profit from the directorship. Acceptance of the appointment of Director is not to be undertaken lightly, particularly if there is no intention to engage in the management of the company’s affairs.

Suggestions of acting as a Director in name only is unlikely to absolve a Director from the burden of the responsibility and it is therefore important a Director applies their mind to the task and ensures that even if they delegate some authority to others for the financial operations of the company, that they keep themselves appraised as to its position.

A failure by a Director to observe such duties may result in a breach of duty potentially having wide ranging ramifications, including but not limited to disqualification.

What are the Companies Act 2006 Directors’ Duties?

The Companies Act 2006 codified various Directors’ Duties that had been set out in case law as follows: duty to act within powers, duty to promote the success of the company, duty to exercise independent judgment, duty to exercise reasonable care, skill and diligence, duty to avoid conflicts of interest, duty not to accept benefits from third parties and a duty to declare interest in proposed transaction or arrangement.

Directors’ Duties for the Assets

Directors’ Duties involves the need to safeguard the company’s property and not to permit their personal interests to conflict with those of the company.  Consider paragraphs [148] and [149] of GHLM Trading Ltd v Maroo [2012] 2 BCLC 369 (“Maroo”), as follows:

[148]  This passage confirms that a “trustee must show what he has done with that [ie trust] property”. It is less obvious that it provides authority for the proposition that the “principle applies to company directors as it does to trustees”, but support for that view is, to my mind, to be found elsewhere. For example, in Sinclair Investments (UK) Ltd v Versailles Trade Finance Ltd [2011] EWCA Civ 347, [2011] 4 All ER 335, [2011] 3 WLR 1153, Lord Neuberger MR (with whom Richards and Hughes LJJ agreed) said (in para 34):

“Although company directors are not strictly speaking trustees, they are in a closely analogous position because of the fiduciary duties which they owe to the company: Bairstow v Queens Moat Houses plc [2001] 2 BCLC 531, 548. In particular they are treated as trustees as respects the assets of the company which come into their hands or under their control: per Nourse LJ in In re Duckwari plc (No 2) [1999] Ch 253, 262. Similarly a person entrusted with another person’s money for a specific purpose has fiduciary duties to the other person in respect of the use to which those moneys are put.”

The close analogy between directors and trustees suggests, to my mind, that, much as a trustee “must show what he has done with [trust] property”, it is incumbent on a director to explain what has become of company property in his hands.

[149]  In the circumstances, I agree with Mr Miles that, once it is shown that a company director has received company money, it is for him to show that the payment was proper. In a similar way, it seems to me that, where debit entries have correctly been made to a director’s loan account, it must be incumbent on the director to justify credit entries on the account. That conclusion makes the more sense when it is remembered that the director (a) will have been (one of those) responsible for the management of the company’s business and (b) will have had a responsibility for ensuring that proper accounting records were kept (see eg ss 386 – 389 of the Companies Act 2006).

Directors’ Duties for Books and Records

Directors’ Duties involves the mandatory duty to maintain proper books and records so that the financial position of the company can be assessed on a timely basis. 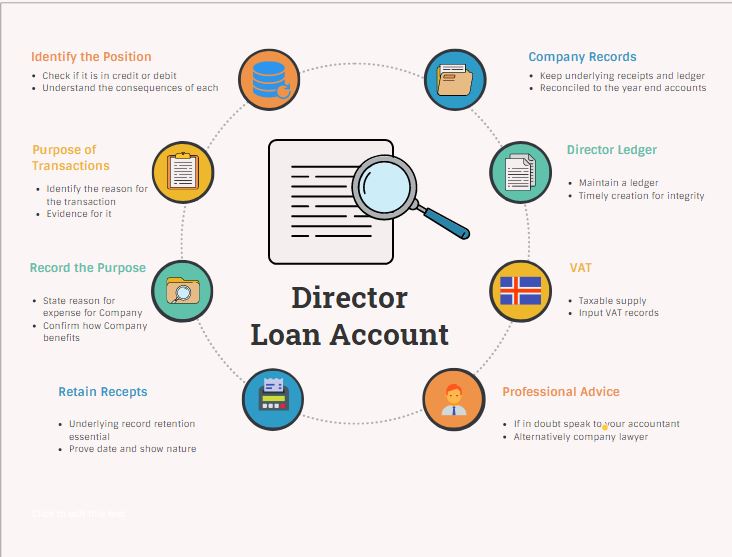 The requirement is set out in the Companies Act 2006 and Directors need to be aware that when they sign a company’s balance sheet for the annual statutory accounts, they declare that they have complied with this duty.

It is the responsibility first and foremost of the Directors to ensure that they have complied with such a duty, not that of any agent, accountant or other financial advisor they may have instructed or sought to delegate such responsibilities.

[17] “…persons who have conducted the affairs of limited companies with a high degree of informality, as in this case, cannot seek to avoid liability or to be judged by some lower standard than that which applies to other directors, simply because the necessary documentation is not available.”

[11]  By the end of the judgment, it is clear that what has impressed the judge most in his task of fact-finding was the absence, rather than the presence, of contemporary documentation or other independent oral evidence to confirm the oral evidence of the Respondents to the proceedings.

Ordinarily a litigant bears the burden of proving its case. Indeed the usual rule is that the party responding to a claim should be left in no doubt as to what the case is that they have to meet. That is a position footed on fairness in litigation.

In a Liquidation when a Liquidator brings proceedings against a Director for compensation in relation to transactions complained about, the usual position will be that it is anticipated the Liquidator will have obtained the requisite evidence necessary from documents and other information coming into the Liquidator’s hands, to prove the case so that he or she can anticipate that the Court will grant the relief sought in the application. This is typically considered to be a positively pleaded case because the information is available. Directors do have specific Duties to a liquidator.

However, a Liquidator enters office as stranger and if the Directors do not properly cooperate and or have failed to create, maintain or retain proper records of the company’s transactions and dealings, then perhaps inevitably a Liquidator might be hampered in seeking to understand its affairs. The same will apply in an Administration.

In such an instance if it can reasonably be shown that transactions have taken place whereby money or property has been transferred from the company to the Directors but there is no contemporaneous record available to show the purpose of such transactions, then Directors can hardly be surprised (given the obligation to keep proper records) that the burden is with them to show that such transactions were proper.

This is what typically might be considered to be a negatively pleaded case ie. the absence of information is the Liquidator’s evidence in effect for it.

If because of poor, bad or non-existent record keeping the Directors are unable to show that transactions from which they appear to have personally benefited were proper, then it appears to have been held in the matter of Toone v Robbins [2018] EWHC 569 (Ch) that the burden of proof shifts from the Liquidator to the Director:

“Directors who receive money from the company cannot be heard to say: –

“We have received company money: but our record keeping is so bad that the basis upon which we received it is unclear. So by reason of our defaults we ask you to assume in our favour that we took the money lawfully”.”

If you have any questions in relation to Directors’ Duties then Contact Us as soon as possible for advice. Our expertise is at your fingertips.